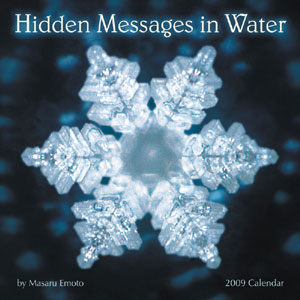 Water is alive. It responds to thoughts and emotions. This reality is revealed by the experiments of Dr. Masaru Emoto, who collected samples of water from different parts of the world. He discovered that water reveals its true nature in frozen crystal form. The water of the waterfalls of remote hill areas and the stagnant water show different crystal form when frozen. Water exposed to meditating or healing music or prayer formed beautiful crystalline structure, whereas the water crystals of that water seemed to be deformed and distorted which was filled in a bottle and the words of negative feeling was pasted on it. This crystalline structure of frozen water could be examined under a dark field microscope that has photographic capabilities.

The power of thought was realized by the beautiful image of the crystalline structure of that water sample which was frozen after it was exposed to positive intentions of approximately 2000 people inside an electromagnetically shielded room in California.

Dr. Masaru Emoto’s experiments on water presents a new perspective to understand the power hidden in human beings. Human body contains more than 60% of water content. If this water content of human body gets the blissful touch of prayers and appreciation it must respond in the same way as the water responded in Dr. Masaru Emoto’s water experiments. Our planet earth also contains more than 60%of water. It can also respond to the prayers for the well being of the earth.

The water of the waterfalls of remote hill areas are said to be healthy for many reasons. Its closeness to pure natural environment can also be one of the reasons of its healthy feature.
Holding the string of Dr. Emoto’s experiments, it is possible to present the scientific explanation of the phenomenon that, how the thoughts and emotions of an individual play a significant role in making of the future of an individual. In this phenomenon the thoughts and emotions definitely lay an effect in the water content of human body. This phenomenon reveals that, the effect of a thought may stay invisible to human eyes but it never means that it doesn’t exist. The photons* associated to the patterns of written words or the vibration of spoken words can bring change in the nature of atoms. Everything in this earth is made of atoms. The moving electrons in an atom can create electromagnetic field. This field can affect the atoms of other mass or body. This could be a better example of presence of God in every tiny bit of the universe. The following pictures show that how the God residing in water responds to the prayers, positive thoughts and music of patriotism.


*Photon : a quantum of electromagnetic radiation, usually considered as an elementary particle that is its own antiparticle and that has zero rest mass and charge and a spin of one. http://www.dictionary.com/browse/photon